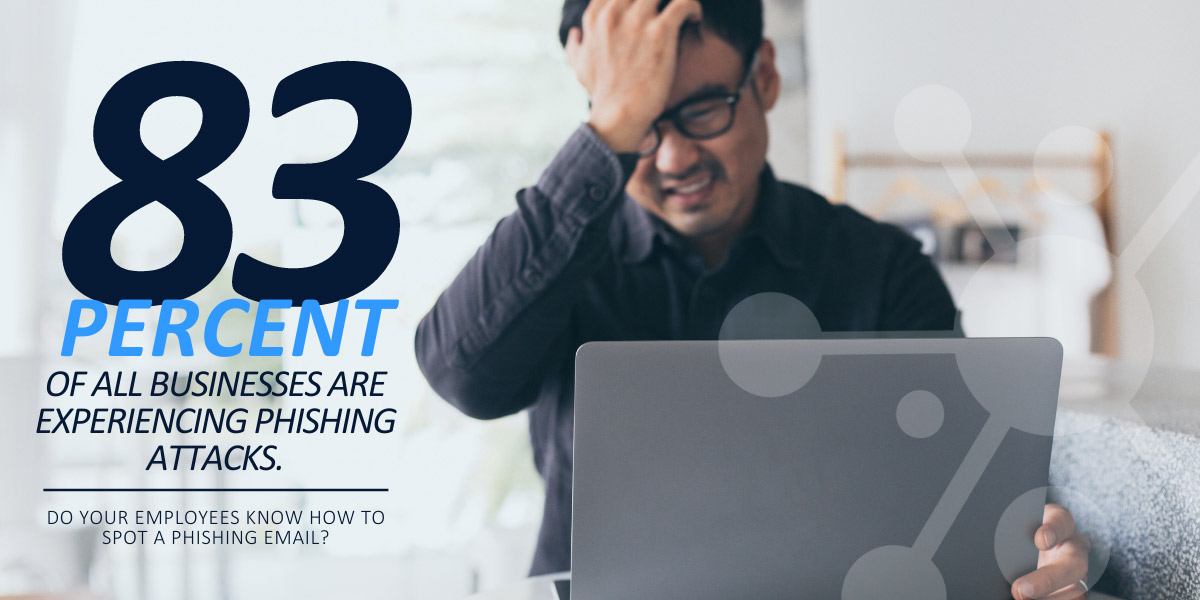 Phishing Continues to Be On The Rise

As email continues to dominate the marketing landscape, it’s more important than ever to understand the steps to detect phishing emails.

Phishing emails are a real thing and can lead to identity theft and a lot of other headaches. So, how do you spot them? If you’re not sure, you’re doing yourself a disservice.

Nearly Half of All Emails Sent Are Phishing Attempts

Email security is something that every organization should be concerned about. A recent study by Symantec indicates that nearly half of all email messages are now being sent using fraudulent addresses. As we move further into the digital era, it’s only a matter of time before more organizations are breached, and the data held about their employees, customers, and business partners falls into the wrong hands. And when that happens, the fallout can be catastrophic.

In fact, many companies already face negative effects from this problem. For example, in the United States alone, 1 in 4 companies have experienced a data breach at some point. And, according to the National Cybersecurity Center, phishing emails have resulted in approximately $1.4 billion dollars in losses to businesses since 2015. As more companies shift to the cloud, phishing emails will continue to present a major threat to companies of all sizes. With that in mind, we have put together this list of steps to detect phishing emails.

The world’s fastest growing hacking technique is phishing emails, but with more than 200 million messages sent daily, how can you spot these threats and protect yourself?

Phishing emails are all too familiar: they come from someone you know and appear to be from a reputable company or organization. They may contain links to your bank account or to a site that looks legitimate, but if you follow the link you will end up with an imposter page. Once you get to the page, you’ll be asked for a username and password or some other private information. But it’s not real; hackers are using your information to try and trick you into giving them access to your bank account or other personal information. Be sure to check the email address at the top of the message. If you see the sender’s address “Your Name”, “Your Company”, “yourbank@email.com”, “gov” or some other email address you don’t recognize, be suspicious.

3. Identify the URL in the Email

The second phishing trick is URL spoofing. A URL spoofing scheme takes a legitimate web address and replaces it with something completely different. The goal is to trick the recipient into thinking they’re sending an email from a company that they’ve had dealings with in the past.

This is a classic email scam. Phishers are constantly searching for new methods of tricking people into opening malicious emails. To do this, they often resort to the classic “click here to open in a new window” technique. Once people click the link, they are directed to a website with a link to a phony product that looks like the real thing. These URLs are usually long and unpronounceable, making it impossible to identify them even if you’re savvy enough to notice the misspellings and grammatical errors.

You can also use this free service to check if an address is a potential phishing attempt:

CHECK IF AN ADDRESS IS PHISHING USING AI

Reading the text is one of the most important steps to detect phishing emails. Phishing emails are a popular tactic used by cyber criminals to steal your data. They’re often very convincing and appear legitimate. But they’re not.

Always beware of suspicious looking emails asking you to click a link to verify something or give them your login information. Remember, the only place you should ever enter personal or financial information is on a trusted website. NEVER send passwords to any organization over e-mail.

The rule of thumb is, “Be suspicious of anything that sounds too good to be true.” Phishing emails are just another example of this—it’s easy to become accustomed to seeing messages with the subject line, “We need your help,” and the subject heading, “Important message from your bank” when you’re getting a flood of email messages in your inbox. Don’t click on links that appear suspiciously within the text of the email.

In conclusion, Phishing emails are designed to trick users into clicking on links that download malware onto their computer or infect their accounts. By the time you read this, you might be wondering how you could possibly have fallen for such a common and effective scam. We are all vulnerable to these scams. We don’t need to fall for them. With a little bit of awareness, we can avoid being victims and can help others by spreading the word about the steps to detect phishing emails.

Additionally, you can be further protected from phishing by signing up for one of our Microsoft Exchange accounts.

Get a Microsoft Exchange Account With Phishing Protection Today!
← Why It is IMPERATIVE That You Use Carbonite To Backup Your Data SSDs Are A Powerful Alternative to Hard Disks →